Activated in Hawaii back in 1941, the 25th infantry Division is known as Tropic Lightning. Their primary operations are within the Pacific and Asia region.

In today’s post, I am going to tell you about the various campaigns the 25th Infantry Division has been a part of and I will also tell you the decorations this division has attained.

During World War II, the 25th Infantry Division participated in several campaigns. The first mission was defense of Honolulu and Ewa Point. 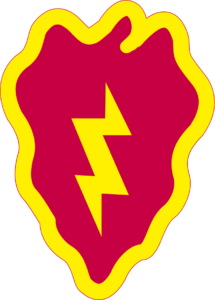 From there, the 25th Infantry Division traveled to Guadalcanal in late 1942. They took Kokumbona from the Japanese and fought in rugged conditions. By February of 1943 they had gained full control.

In mid 1943, the 25th moved on to the Solomon Islands and New Georgia. They captured Vella Lavella. By the end of September, they had control of New Georgia and had also cleared Arundel Island.

The 25th then went to New Caledonia for added training for upcoming missions.

The training made this division live up to their name. The 25th was like lightning as they landed in the area of Luzon, Philippines. The 25th battled the Japanese through the plains and rice paddies. They then went into the mountains and battled fiercely. They captured many important points and afterwards, they spent occupation duty in Japan for 5 years.

Following are soldiers who were awarded the Medal of Honor during these campaigns:

Tropic Lightning also has this from World War II:

Tropic Lightning was a major “player” in Korea. They were one of the first divisions transferred to Korea when the North crossed the 38th Parallel. Their first mission which was successful was blocking any entrances to Pusan.

In October of 1950, the 25th broke out of Pusan and drove into North Korea. But Chinese forces pushed back. It was give and take until settling south of Osan.

In January of 1951, the 25th launched a new mission and by February, they had captured Kimpo Air Base and Inchon.

The 25th was instrumental in the creation of the Iron Triangle with Operations:

Last but not least, Tropic Lightning defended Seoul from a heavy Chinese attack and the 25th was one of the most decorated divisions during the Korean War.

It is difficult to remember as there were many Tropic Lightning soldiers who died in the jungles of Vietnam.

These soldiers fought bravely all throughout the Vietnam War and they participated in these campaigns:

Through all of this, there were many Medals of Honor.

The 25th had various decorations for their service in Vietnam. They were:

The Middle East And War On Terror

Tropic Lightning has played some parts in the Middle East. Here are some facts:

Known for moving swift and sure just like a bolt of lightning, the 25th Infantry Division deserves their nickname Tropic Lightning.

We would love to hear from current or former Tropic Lightning soldiers… Please tell us a story of your time in the division.

Thank you for your service.

You can leave your comments and questions below and please share this on social media. Thanks..